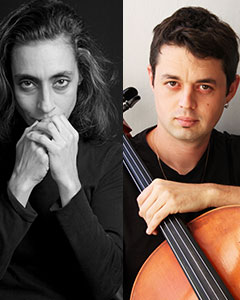 NOOR  is a journey to seek a primal breath, and the essence of movement and sound within it. In the midst of a dark abyss, three disguised figures dance in an illusory world of hybrid creatures. They shed cover after cover, turning the skin of things inside out, gradually revealing their true nature. “Noor,” “light” in Arabic, is derived from “Dinur,” the river of fire depicted in the vision of the prophet Ezekiel, Book of Ezekiel. In 2020, a year that provokes anxiety and chaos, NOOR offers a reminder of the human need to elevate beyond fear, to carry and to care for each other. The full work consists of four parts, lasting about 45 minutes.

This video is an excerpt of a full evening-length work.

Tamar Borer is a choreographer, performance artist, dance teacher and guided imagination therapist. Her works deal with social and philosophical themes. Since 1988, Borer has created and performed solo, duet and ensemble productions with interdisciplinary artists. She has been invited to perform throughout the world, such as Montpelier International Dance Festival, France; Cross Over Festival, Italy; as well as in Bonn, Hokkaido, Mexico City, and Oslo, among others. Alongside her artistic activities, she conducts encounters and conferences to empower challenged and abused communities. Borer has received numerous prizes and scholarships for her work including The Alber Gaubier Fund and OT Hachesed. Borer is supported by the Office of Education and Culture, Mifal Hapais, Tel Aviv Municipality.

Tom Klein is a cellist, composer and sound artist. In his work Klein incorporates improvisation, contemporary composition, studio production and performance art. He has performed at the Israel Festival, Mekudeshet Festival, Pecha Kucha TLV, Dance at Mazia, Oooh festival, and has collaborated with composer Arik Shapira, performance artist Tamar Borer, the Lab Orchestra, and Notzar Theatre among others. In 2015, Klein founded the experimental trio GOG, with which he has released a debut album and several EP’s. In 2020, Klein founded SEDEK, an art venue and studio in Jerusalem run by a collective of musicians and artists aimed at promoting the experimental scene. Klein has earned multiple scholarships from the America-Israel Cultural Foundation, the Mifal Hapais Council for the Culture and Arts, and the Siday Fellowship for Contemporary Music.

The work is supported by the Office of Education and Culture, Mifal Hapais, and Tel Aviv Municipality.

You have reached the maximum number of streams allowed for this video.